Over the past four decades, China’s economy has boomed. With increased wealth and security people in China have more disposable income. In turn, this has created a huge market for Chinese people to travel, many choosing to explore their own large and diverse country. In 2017 alone there were a reported 5 billion domestic holidays made in China. Tourism can offer boosts for local economies, but can also have detrimental effects on fragile and unique communities, most particularly in more remote and historical provinces such as Yunnan and Tibet.

Yunnan is a province in the south of China known for its stunning scenery and cultural diversity. Around one-third of Yunnan’s residents are ethnic minorities, including the Yi, Bai, Hani, Zhuang, and Dai people; each group making up over a million residents in Yunnan.

Yunnan is very mountainous and the remote nature of its residents’ lives has meant that they have been sheltered from the politics of lowland areas. Many Yunnan cultures have been relatively unimpacted by Han Chinese culture meaning they are among the most unique in China. Yunnan borders on Laos, Burma, and Vietnam and is close to Thailand. Certain areas are so remote that many residents of the region would not consider themselves nationals of any of these nations, but only consider themselves in terms of their cultural identity. 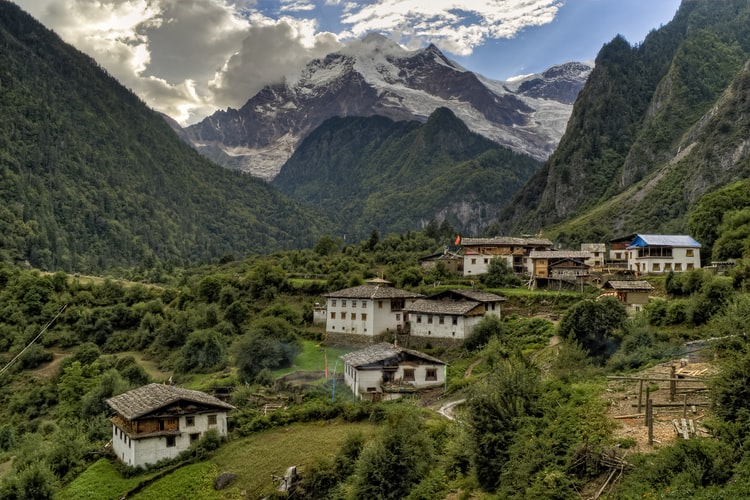 Unsurprisingly, Yunnan with its unique cultures, and remote settlements surrounded by breath-taking scenery has become a must for many Chinese tourists. The province has been inundated with travellers, bringing with them huge economic benefits. To help tourists visit places like Lijiang and remote Yunnan villages better roads and transport links have been built, and facilities such as hospitals have been improved.

Tourism offers local indigenous people the opportunity to increase their wealth, whether that be through opening guest houses or through selling clothes and souvenirs to visiting tourists. Money coming in from tourism has been invested, at least in part, in preserving culture, for example, the Naxi Dongba museum in Lijiang is increasingly complete, and now contains thousands of artefacts.

Indigenous residents of many Yunnan tourist towns are learning traditional skills like dancing, calligraphy, and religious practices because tourism has increased their personal interest in their culture.

Naxi Dongba calligraphy is particularly popular among tourists as the writing system uses Hieroglyphic characters, and tourism in Lijiang has increased interest in the writing system among locals as well as in the wider world. In many ways, tourism has improved living standards and cultural connection in the region. 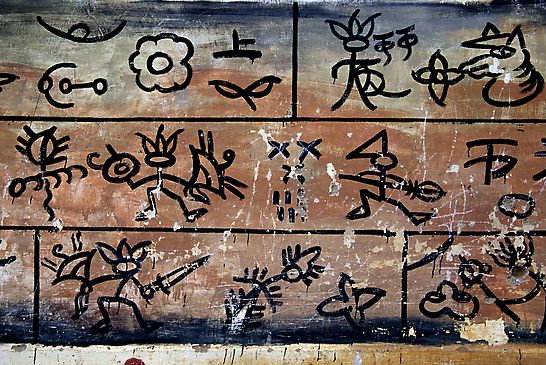 However, overwhelmingly the impacts of tourism on native Yunnan cultures and people has been destructive, problematic, and turned living cultures into tourist traps, and beautiful old towns into glorified Disneylands.

Local cultures have moved from authentic practices to showpieces. Indigenous people in Yunnan often have a rich tradition of religious and cultural practices, however, some are seen as unmarketable to tourists. This means we see a move away from these practices. One example shows how a Dai flower festival was moved from Damuyu, where it had been traditionally held, to a nearby town that was larger and more accessible for tourists, despite Damuyu’s history with the event; brushing aside tradition for financial benefits.

Traditional religious practices, dances and rituals are condensed down to bite-sized shows. Intricate cultural practices that would normally take place over weeks, or on specific dates have become hourly dances that have been largely invented to please tourists. “In Lijiang, for instance, religious rites that used to be performed when worshipping Dongba deities are condensed and transformed into dances and shows that are performed on the stage at hourly intervals to fit into the tight schedules of tourist itineraries”. 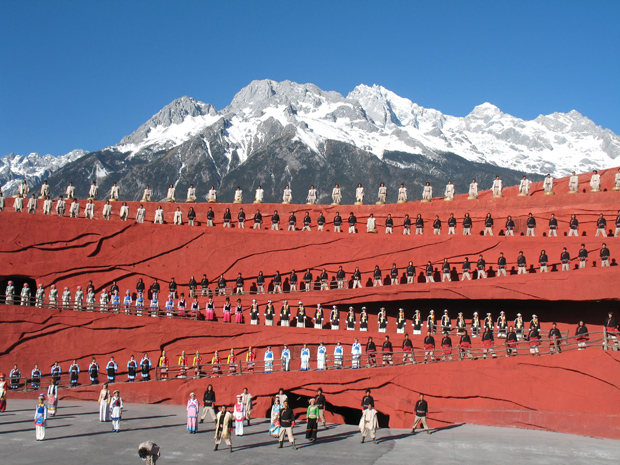 Dongba traditions of writing and storytelling have ceased to be used for anything other than fun things to put on t-shirts, very few people remain who can fluently read Dongba script. Traditional Bai costumes have been replaced by less authentic pieces made in Guangdong, that as well as being more Han in style, remove the traditions or clothe making from the communities.

Mosuo culture has also been cheapened by tourism. The Mosuo have a unique family structure; husbands and wives live with their parents even after marriage, there is also a matriarchal rather than patriarchal style too their culture. Many tourists believe, incorrectly, that Mosuo women have many partners and are sexually promiscuous. Tourists visit Mosuo towns hoping for one-night stands and easy sex, this increase of unwanted focus has actually led to a decline in the traditional practices that help define the uniqueness of Mosuo culture.

In Lijiang and Dali Old towns, we see a worrying trend of ‘Hanification’ and destruction of living cultures due to massively increased tourism, particularly since Lijiang became a UNESCO world heritage site. Up until very recently, Lijiang was full of Naxi people, as it had been for the past 800 years, people who practised their culture, spoke in their native tongue, and preserved the area’s history. However, between 1987 and 1999 around 33% of locals moved out of Lijiang, and this trend is accelerating rapidly. In 1996 there were 30,000 Naxi households, as of 2010 that number was 6,000. In many ways, Lijiang has stopped being a town and become a museum.

The trend of people moving out has been accelerated for several reasons. The increase of tourism in Lijiang, which now has an annual footfall of roughly 8 million people, has drastically changed the quaint old town. House prices have rocketed and traditional spaces and stores have been replaced with gift shops and even McDonalds. 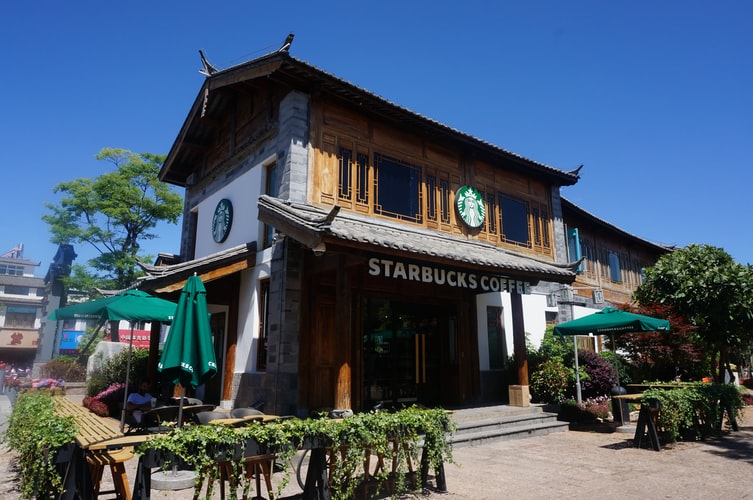 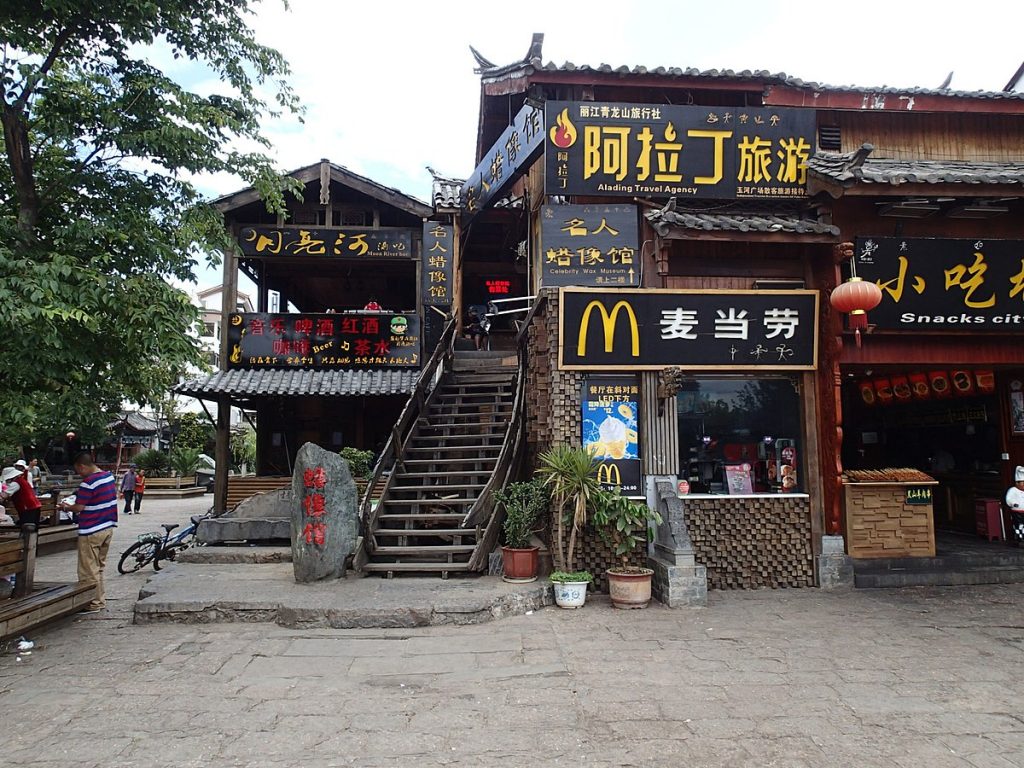 Government-controlled property in Lijiang is now allotted under a bidding system. One business owner in Lijiang described how his rent moved from 50,000 Yuan to 1,000,000 Yuan annually in the space of one year as a result of the bidding process, this increase forced him to leave Lijiang.

Lijiang has changed from a serine place to a loud and bustling tourist sight full of bars, karaoke venues and night clubs. Many residents have left because Lijiang no longer feels like home or even a suitable place to live. The businesses selling food, and cheap local restaurants have all been replaced by those that cater to tourists meaning residents can’t even buy food or day to day essentials. What is happening in Lijiang has also meant that Naxi people, who previously had an ethnic home, are spread into big cities and increasingly lose access to and connection with their own culture, in the end, Lijiang’s popularity could be the end of Naxi living culture.

Speaking in 2015 a resident said, “Most of the indigenous residents have moved to the new city…In the town, indigenous residents are all gone”. He also highlighted the environmental and architectural decline of Lijiang “In the town’s vicinity, there were massive pieces of rural land. So, you could get embedded in the natural environment when you stepped out of the town. Now the natural environment is occupied by concrete buildings – hotels, shopping malls, and commercial housing. Previously the town was built in a rural setting with rustic charm; now it is permeated with and surrounded by shops. It becomes a huge supermarket with all sorts of tourist services and souvenir shops”. So not only has the demographic change taken the living culture out of Lijiang but it has begun to change the material of the beautiful town too. For Naxi people, like many Chinese cultures, their relationship with the natural world is very important.

Tourism is creating environmental problems across Yunnan. Guesthouses and hotels in Dali, Shuanglang and many other towns have pumped raw sewage into Erhai Lake. Government officials have acted to reduce pollution but the problem hasn’t been rectified entirely. In Dali many restaurants and hotels were forced to close for over a year, however, there is little evidence of water quality returning to its previous, high, levels. 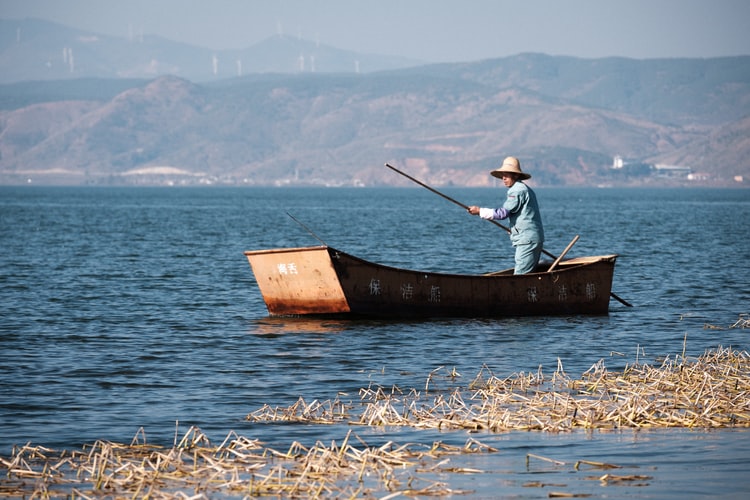 As non-native residents move into Yunnan, we also see an increase of buildings being changed and altered away from their traditional styles. Lijiang has not only lost its population but its physical history, in Lijiang traditional buildings are being modified to suit Han styles, not Naxi ones. The same issues exist across Yunnan for example in Shuanglang traditional Bai buildings have been pulled down and replaced by modern guest houses.

Recently local governments have moved to reverse the decreasing reputation of many tourist towns in Yunnan; however, the moves seem too little too late. In 2017 officials in Lijiang moved to clamp down on tourist shops that didn’t focus on traditional Naxi cultures. The move also limited construction of new bars and restaurants and attempted to increase Lijiang’s appeal, however, nothing is being done to return Naxi residents. Other changes include increased pressure on business, particularly hostels, to not exploit tourists. Although both moves are a step in the right direction, they may not be enough.

The problems exist for a number of reasons. The local and provincial government believe culture can be commodified and used to make money both for them and their towns. However, very few indigenous residents live in Lijiang anymore. Residents haven’t been helped out of poverty, rather replaced with a wealthy migrant population, in a sort of tourism induced gentrification. Secondly, and perhaps most importantly, local governments are predominantly run by Han Chinese people who don’t seem willing to engage in the complexity and diversity of the cultures that exist in rural Yunnan. The future of these ethnic groups and their heritage should be in their own hands, and unless things change soon many minority cultures that have existed for millennia will soon be erased or cheapened beyond recognition.